When the wave of religious assertion which we call Puritanism is considered in the broad perspective of Christian history, it appears no longer as a unique phenomenon, peculiar to England of the seventeenth century, but as one more instance of a recurrent spiritual answer to interrogations eternally posed by human existence.

Thus writes Perry Miller in The New England Mind: the Seventeenth Century, as he embarks on a fascinating explanation of the Puritans’ extended heritage.  Considering Puritanism in context of the Christian tradition—and, even more, in light of the great human questions—lends greater significance to my own study.  I hesitate to claim understanding of a movement until I know its place in history, major forebears, and how it speaks to these questions:  What is man?  How should he live?  Thus, considered in relation to the major currents of Church history, the Puritans can be both better understood and more ably appreciated.  Because I am just beginning to grasp the broad historical issues, my formulation will err on the side of simplicity, but here’s a try…

Early in Church history, Christianity separated (and tried to synthesize) two influential currents: the Augustinian tradition and the Scholastic tradition.  These two movements were defined by their answers to these questions: Which is pre-eminent: faith or reason?  If you choose one, what place does the other have in Christian practice? Can there be a synthesis? 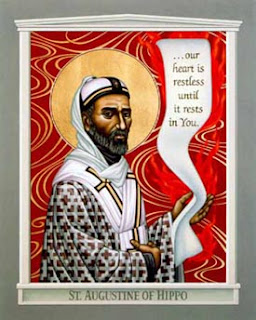 In devotional practices, the Puritans follow in the tradition of St. Augustine, who placed faith foremost.  In The New England Mind, Miller identifies the Puritans’ location within this centuries-old tradition of piety.  Miller reminds us that “Augustine is the arch-exemplar of a religious frame of mind” continued over fifteen hundred years of religious history, of which “Puritanism is only one instance” (4).  He emphasizes that Puritan thought was not entirely new.  The Puritans’ fervent repudiation of Catholicism did not mean that they rejected all aspects of it; rather, they drew heavily on Augustine’s doctrine, medieval devotional works, and even contemporary Catholic authors.

As Augustinians, Puritans favored revelation over reason.  Reason is corrupted, they thought; we cannot trust it.  This debate dates back to the medieval Scholastic movement and, especially, Thomas Aquinas, who revived interest in Aristotle and emphasized the role of reason in Christian understanding.  The Puritans conceived dangers with Catholic attitudes toward reason: Through reason, they thought, we can only conceive God through balancing his attributes, e.g. justice and mercy. These attributes are modes of human understanding—they are not God’s essence (13).  Because we tend to exalt one attribute above another according to our tastes, we can easily arrive at a skewed view of the Almighty.  We must keep these attributes in balance and never forget the essential mystery of God.  Thomistic theologians had erred by making God too rational” and exaggerating certain of His characteristics (13).  Puritans accused scholastics of trying to “confine the unconfinable within artificial distinctions.

Rather than depend solely on reason, the Puritans depended primarily on the revealed Word of God, i.e. the Bible.  Miller notes a reservation, though, consistent with the Puritan concept of God’s incomprehensibility: the Bible does not reveal God’s fullness (10).  Behind the Bible is God’s secret will, His mystery.
Puritan descent from Augustine is clearest in the matter of sin.  Man is living at odds with the all-perfect God.  Miller summarizes Augustinian piety in relation to sin: “The maimed soul, even while persisting in evil, longs for deliverance from the body of this death, for reinstatement in the created harmony” (22). The core problem is man’s separation from God and man’s own imperfection: “The Augustinian strain of piety flows from man’s desire to transcend his imperfect self,” to connect with the divine (8).  It “cries out for forgiveness of the sins by which he has cut himself off from full and joyous participation” and “draws sustenance from the moments of exaltation in which glimpses of the original happiness are attained” (8).  Knowledge of God and of one’s soul are the means to attain truth and happiness.  To seek this knowledge, Augustine and the Puritans turned to an “analysis of soul.”  These ideas reappear in Puritan works: Augustine is quoted frequently, echoed in their rhetoric, and read often by Puritans.

Charles Hambrick-Stowe, in The Practice of Piety, illustrates the likeness of many Puritan personal writings to Augustine’s Confessions  and identifies the Puritan relationship to other Augustinians (26).  Hambrick-Stowe, who acknowledges his debt to Perry Miller, probably drew the Augustinian connection from The New England Mind.  He adds that the Puritans are not Augustine’s only heirs.  He traces Augustine’s influence through the medieval mystics and even to seventeenth-century Anglican meditative poet George Herbert.  The American Puritans evidently used Catholic devotional texts, including the works of medievals Bernard of Clairvaux and Thomas à Kempis, and they read George Herbert, their contemporary.  Independently of this study, I had developed interests in Western mysticism and in Herbert, so it’s exciting to see a common thread!

The Puritans do have clear, significant answers to questions about humankind, and they did not formulate these answers in a vacuum.  I’m interested in exploring further how these influences affected their thought, their devotional life, and even their word choice.
Posted by Christine at 9:49 AM