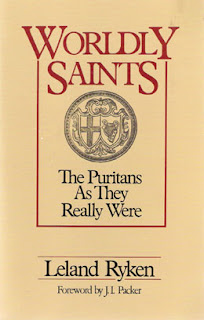 According to Leland Ryken in Worldly Saints: the Puritans As They Really Were, we have been misled by modern portraits of the Puritans as dour, dark-clothed, money-grubbing, old, intolerant, strict, moralistic enemies of fun, color, art, sex, and emotion.  While the Puritans did sometimes indulge in too much self-loathing and were strict and intolerant compared to contemporary standards, they were hardworking, serious, moderate, well-informed, argumentative, and well-educated.  They sanctioned joy and normal clothing, they were opposed to hypocritical legalism, and, after all, no group at their time was fully tolerant in religious or political spheres.  The following paragraphs gloss certain points that interest me, illumine what I’ve already read, or apply to themes I’m exploring.

Comparison of American and English Puritans. This book encompasses English and American Puritans.  The historical timeline was helpful, for Ryken traces the major points in 16th-17th century England that caused Puritanism to rise.  Compared to English Puritanism, Ryken finds New England Puritanism “a less attractive phenomenon—more prone to intolerance and heavy-handedness, to complacency, to legalism, to inner decay.”  Why? In England, Puritans were the persecuted minority, but in N.E., Puritans were the majority.  They had established churches and political structures, and people could devote themselves to “institutions rather than ideals,” thus corrupting their vision of pure religion.

Sermons.  I didn’t realize how incredibly popular Puritan preaching was in England and America, a good sermon drawing crowds from miles around.  This wasn’t because of fancy style, for the Puritans used what is called “plain style.”  They rejected the ostentatious, quote-filled sermons of their peers, thinking such words led to self-exaltation.  Besides, pastors were trying to reach all levels of society, even illiterate and poor.  Spiritual edification and intelligibility were more important than aesthetics, content more important than form.  John Flavel said, “Words are but servants to matter.” 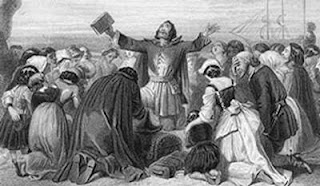 Sermons were affective—intended primarily to move the listener toward right Christianity.  Samuel Ward wrote in his diary to “remember always at the hearing of God’s word to be applying the things delivered always to thyself, and so bythoughts will take less place.” [English]  Listening meant active involvement, especially notetaking and post-meeting meditation.  Edmund Calamy wrote, “One sermon well digested, well meditated upon, is better than twenty sermons without meditation.”  Remembering the sermon was essential for meditation, so sermons were very well-organized.  As I mentioned in one of my early posts, families repeated the main points at home.

Role of words.  Besides examining the sermon culture, Ryken makes cogent observations about the general role of words in Puritan life.  They were certainly a highly literate people, who so valued a liberal education that they founded Harvard only six years after settling in America!  Ryken writes, “The acts of worship emphasized by the Reformers and Puritans were overwhelmingly literary acts: reading the Bible, meditating on its meaning, listening to sermons, and talking to others about one’s grasp of doctrine” (124).   They expected the “verbal imagination to do the work” that Anglicans/Catholics had left to the visual senses.  Puritan language was richly reliant on “master images,” figures, and Biblical allusions.  Opposing the accusation that lengthy Puritan discourses are dry and forensic, Ryken writes, “Once we grant the validity of the verbal image, it becomes clear that the Puritan worship service did not starve the imagination or even the senses of the worshiper.  Allusions to the Bible carried immense imaginative and emotional voltage for a person to whom the Patriarchs were like neighbors and Mary and Martha like their own sisters.” (125)  Images, instead of being visually enshrined on altars and in statuary, were “embodied in the sermon.”

Ryken’s volume is an easy-to-read, encouraging, and candid avowal of both Puritan strengths and weaknesses.  It was mainly pleasure reading, yet I have also gleaned reading suggestions from Ryken’s extensive bibliographies and abundant quotations.  My summer study plan is relaxed, since I have other reading requirements, but I’m enjoying slowly perusing a few books!
Posted by Christine at 7:28 PM 1 comment:

"There is a strange idea abroad that in every subject the ancient books should be read only by the professionals, and that the amateur should content himself with the modern books. Thus I have found as a tutor in English Literature that if the average student wants to find out something about Platonism, the very last thing he thinks of doing is to take a translation of Plato off the library shelf and read the Symposium. He would rather read some dreary modern book ten times as long, all about “isms” and influences and only once in twelve pages telling him what Plato actually said. The error is rather an amiable one, for it springs from humility. The student is half afraid to meet one of the great philosophers face to face. He feels himself inadequate and thinks he will not understand him. But if he only knew, the great man, just because of his greatness, is much more intelligible than his modern commentator....It has always therefore been one of my main endeavours as a teacher to persuade the young that firsthand knowledge is not only more worth acquiring than secondhand knowledge, but is usually much easier and more delightful to acquire....

"Every age has its own outlook. It is specially good at seeing certain truths and specially liable to make certain mistakes. We all, therefore, need the books that will correct the characteristic mistakes of our own period. And that means the old books. All contemporary writers share to some extent the contemporary outlook – even those, like myself, who seem most opposed to it....

"The only palliative is to keep the clean sea breeze of the centuries blowing through our minds, and this can be done only by reading old books. Not, of course, that there is any magic about the past. People were no cleverer then than they are now; they made as many mistakes as we. But not the same mistakes. They will not flatter us in the errors we are already committing; and their own errors, being now open and palpable, will not endanger us. Two heads are better than one, not because either is infallible, but because they are unlikely to go wrong in the same direction. To be sure, the books of the future would be just as good a corrective as the books of the past, but unfortunately we cannot get at them." --C.S. Lewis


Lewis cleverly explains one reason for my attachment to Puritan writings: they are from an age so different from mine that I can't help learning from them.  In our day, for instance, we don't talk much about the benefits of suffering.  Or, today it's taboo to claim that one's belief is the true one.  As a culture, we don't encourage sitting still, contemplating, and examining inner thoughts.  Yet these ideas were Puritan priorities.

Among the modern virtues we emphasize, have we neglected other important things?  At the same time that we see antique cultures' faiblesse, reading their literature can balance modern deficiencies.  And, like Lewis pointed out, we may just find their writing "easier and more delightful."
Posted by Christine at 12:59 PM 3 comments: