So faithful were the Puritans to “grace alone” that pious practices—if performed from self-exertion and to earn salvation—could be considered sinful acts of pride.  David Brainerd (later a Puritan missionary to the Indians) poured his life into prayer, fasting, and other exercises for years, but he gained no assurance of salvation.  He realized later that these were all selfish acts; the more he tried, the further he became mired in sin.

Before this, the more I did in duty the more hard I thought it would be for God to cast me off….But now the more I did in prayer or any other duty, the more I saw I was indebted to God for allowing me to ask for mercy; for I saw it was self-interest had led me to pray, and that I had never once prayed from any respect to the glory of God….I saw that I had been heaping up my devotions before God, fasting, praying, pretending, and indeed really thinking sometimes that I was aiming at the glory of God; whereas I never once truly intended it, but only my own happiness. (Life and Diary Part I)

In the above passage, Brainerd shows the Puritan attitude toward examining their behaviors: the underlying motivation is what matters.  Perry Miller observes, “Guilt or innocence consisted not in what was done but in what was intended” (The New England Mind 52).  Since intentions cannot be judged from outside, and judging one’s own motives is a tricky business, Puritans navigated this soul-searching by using Bible- and prayer-based methods of self-examination.  Their purposefulness and faithfulness in these exercises astounds me!  Yet the impetus is real: to be secure in salvation, you must be sure that you depend on grace, not on your own devotional practices.  And even after salvation, you must remember that your piety fully depends on Christ’s work. 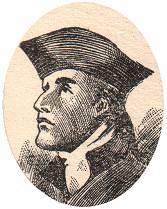 David Brainerd at last came to the conviction that Christ alone was able to save, but he continued to be aware of this issue, recording years later,


Had some intense and passionate breathings of soul after holiness, and very clear manifestations of my utter inability to procure, or work it in myself; it is wholly owing to the power of God.  Oh, with what tenderness the love and desire of holiness fills the soul!  I wanted to wing out of myself to God, or rather to get a conformity to Him. (Life and Diary Part V)

Compared to the first quotation, in this quote Brainerd has moved from selfish to selfless piety.  Enthralled with holiness, he longs to be wholly freed from hollow, prideful righteousness.
Posted by Christine at 3:07 PM